Satyamani Natural Narmedeshwar 4 Inch Damroo Heavy White Jaldhari with 2 Inch Lingam is made from a rare naturally occurred lingam found only in the Narmada River in India. Lingams (also called Shiva Lingams) are a variety of cryptocrystalline quartz that is oval in shape and contains earthy hues, usually two-toned. In ancient Sanskrit, Shiva Lingam means a sign or symbol. These Lingams are gathered once a year in a special ceremony and then polished by hand. This is a symbol of the Hindu god Shiva that can Charge the entire chakra system. It helps to break up old patterns and open the path for new life. It helps in activating third eye and for amplifying ones institution ability. It enhances organizational skills, clarity of thoughts and helps one in making right decisions. It makes you more aware of sounds including telepathic sounds. Worship of the Lingam with the Sacred Mantras like Vedic Suktams, Stotrams, slokas cause very high intense and invisible effects. It is experienced by many that the sacred and powerful sounds from such mantras create a powerful internal reverberation which is absorbed by the Narmada Shivling. With consistent worship, this energy is slowly released and emitted to the surrounding environment and such generated energy specially known to have the capacity to destroy even the accumulated karmic burdens of worshipper. Simply Chanting of Om Namah Shivaya and other simple mantras focusing the Bana Lingam dissolves the negative karmic baggage Praarabdha Karma carried by the individual
DISCLAIMER: No claims are made on metaphysical properties of this stone. These literature is collected from writings, books, folklore and various sources. The actual product may slightly vary from picture as these are natural stone and no two stones can same in pattern. 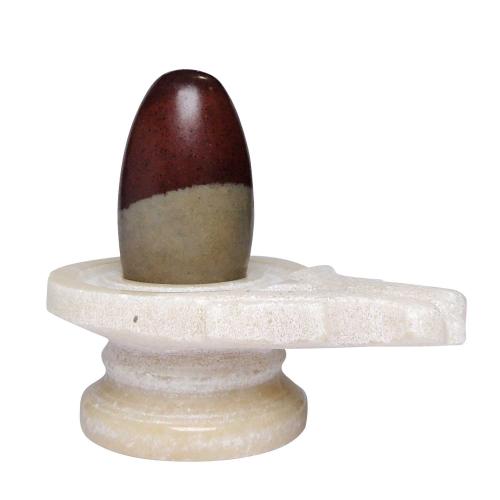